In our household, bath time can be a very situation. That’s because my daughter knows that bath time leads to bedtime and bedtime…well bedtime is the opposite of fun.

Ever since the parks were shut down, my daughter’s main source of fun has been confined to indoors. I had to since, appeal to her creative and boy does she have one. Recently my husband bought playdough but that dried out so, she’s been bored ever since. She always asks for it so I took matters into my own hands. 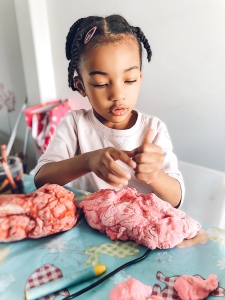 I knew that many other moms were far more creative than me and if I could alleviate my daughter’s creative itch than I would do it. After searching on Pinterest for DIY playdough, I found this super easy DIY playdough that my kid could use in her bath. 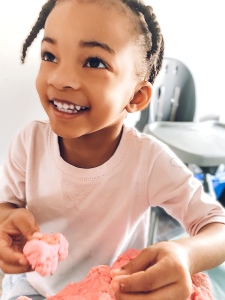 Based on that smile you can see that she absolutely loves her playdough. She gets to roll it, pat it, fold and mold it according to her liking. She loves playing with it at the kitchen table while watching her YouTube videos. Every once in a while I am forced to pretend eat a slice of pink “cake” or a pink and red “hamburger”.

What she loves most is that she can play with it in the bath tub. Eventually, the playdough falls apart in the tub as it foams up but it still retain it’s playdough texture. It foams up when introduced to water.